Astra is the fairy of comets. She doesn't come from a planet, but the ninth asteroid in a belt called the Vajra Orbit. It's very small and counts less than 50 inhabitants, so she knows everyone that lives there.

Since her planet has such a small population, she was very worried on how she would have to obtain her Enchantix, as it meant someone she personally knew and most likely cared about, would be in danger.

Astra has somewhat of a boyish personality. She really likes watching sports, especially wrestling, vehicles, ... and isn't too keen on a lot of stuff that's perceived as typically girlish like shopping. Sometimes people will make nasty remarks about it, but she generally doesn't really mind, because of her care-free nature. As a pretty gregarious girl, she enjoys the company of others a lot. To some people her presence can be somewhat tiring as she's very active and talks a lot.

She has a very strong sense about right and wrong, a little too strong if you ask me. In fact, it's a very bad combo with her hotheadedness. It isn't unthinkable that she gets into trouble for punching a bully without a second thought. This happens a lot because she's a pretty impulsive person, especially when she witnesses something she'd consider as 'injustice'. To her being impulsive and/or frank, is still better than regretting you didn't act at all during specific events, even if it might backfire some times.

All in all she's just a very energetic and vigorous person.

Astra is what you'd call a feminine tomboy. She doesn't really care about girly stuff, but still doesn't mind to have her hair long or wear make-up. You'll rarely see her with a skirt though, unless she's wearing shorts under it.

She has a tawny skin, light blonde hair and pink eyes.

Despite her appearance, she's very strong. Physically. As a fairy, her powers are average, but she's capable of lifting very heavy objects, or kicking open doors in one go. 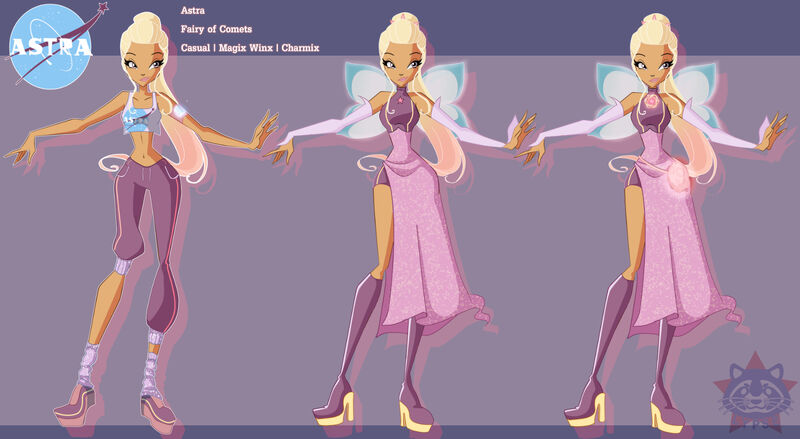 She obtained her Enchantix after stopping a meteor that was about to crash into her asteroid belt.

There were some changes involving Astra in the 4Kids dub:

Retrieved from "https://winxclubfanon.fandom.com/wiki/Astra?oldid=69062"
Community content is available under CC-BY-SA unless otherwise noted.