Start a Wiki
The Fairix Circle is a Group of teenages who attend(ed) Alfea College for fairies.

Amelia Echo - Amelia is the Founder and leader of the Fairix Circle, she is forceful and the princess of Melody. She is the Fairy of Music and Sound

Cordelia Sanderson - Cordelia is late comer of the group, she is classed as the peace keeper/maker of the circle, she is Princess of Linphea. Cordelia is the Fairy of Nature and Rocks.

Clara Goldmelt  - Clara is Cordelia's best friend and rival to Thomas Carlson, she is princess of Reaction. Clara is the fairy of Gold and Metal.

Iris Glaycia - Iris joined the Fairix unwillingly as her farther told the Fairx Circle to take her away because Isis, her home planet, was under attack, and once they got away, the planet ignited like the sun. She is the Princess of The Frost Giant, (she doesn't like being clled a Fairy).

Hayley Sanderson - Cordelia's sister and keeper of the griffen essence. She became an ally when Iris need someone to talk to about controlling her Spirit Source, Cordelia brought Hayley over from Linfea and she has helped ever since. Now, she has officially joined The Fairix Circle, (Being welcomed with a promotional poster, See Here)

April Dragoness - April is co-founder of the Fairix, she formed the group along with Amelia Echo, however when they both lost their powers, only Amelia's were returned, until she found a power source called the Pheonix Heat. She is the Fairy of Fire and Heat.

Laura Aqua - Laura was Thomas' replacement when he left. She comes from Andros and is the Fairy of the seas.

Bliss Lovheart - Bliss is the Fairy of love and emotions. From the planet Emotia.

Thomas Carlson - Thomas is one of the extremly rare male Fairies, he is considered the "magic of the circle", he is prince of Solaria. Thomas is the Warrior-Fairy of the Sun, Moon and Stars aswell as Warrior-Fairy of Solaria. He left the group becoming the sun for earth and returning back to normal. He returned once again to help rid the magic dimension of the Demi-Trix but this time, only as an occational ally.

Sophie White - Sophie is the Princess of Toxins, she was best friends with Clare and Cordelia. She switched sides and joined the Demi-Trix.

Kyle Greenland - Kyle was in the group for a short period of time, he and Thomas didn't like each other, he lived on Frostic. He is the Fairy of Ice and Cold.

Simon Parker - Simon was a human from earth and was granted powers by Thoms and Cordelia, they were taken away from him a few days later but Thomas and Cordy still class him as a Fairix Memeber. For that breef time he was the Fairy of Technology.

Thomas meets April and Amelia and they earn their Charmix at Alfea. This is the second year at Alfea, so all fairies their have their Winx.

This season has Thomas, April and Milly earning their Enchantix, Kyle also joins the group for a bit and he earns his Enchantix.

It is the second half of the final year at Alfea, Kyle has left the Fairix Circle and April and Amelia will lose their powers, and Cordelia will be introduced as Thomas's Love intrest and a new member of the Fairix Circle.

They have graduated and Thomas and Cordelia recruite two new fairies, Sophie White and Clara Goldmelt, they all gain Believix. Thomas becomes Earth's new sun after it was destroyed by the Demi-Trix.

Thomas is revived and they all gain Sophix and Lovix. Sophie joins the Demi-Trix, and Thomas, Cordelia and Bliss go to Melody to return Amelia's powers of Music and Sound. At the End, Thomas leaves the group.

April returns having regained her powers and the Demi-Trix grow in strength. Laura replaces Thomas. and Thomas returns at the end as the new Warrior-Fairy of Solaria.

A new Fairy is welcomed into the group as her realm is blown up by the Demi-Trix (Iris). She goes through trials at  Alfea to see how strong she is, while there, she uses her power source, The Frost Giant, to will herself into gaining: Charmix; Enchantix; Believix; Sophix; Lovix; Harmonix and Sirenix. Showing just how strong she truely is, Iris vows to destroy the Demi-Trix, While this is all happning, The Fairix Circle discover a new transformation: Realmix. As they gain it one by one, Cordelia is forced to revert to her Sirenix by Emily, Laura's alternate witch personality. Eventually, Cordelia calls on her sister, Hayley, to help to train Iris, and she becomes another member. At this point, Iris and H'ayley gain Spiritix. April is the only one who didn't reach Realmix and is still in Aspirix. 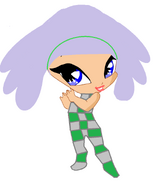 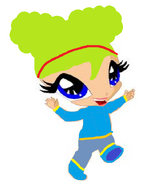 Alorna, Pixie of Normallity
Add a photo to this gallery

The Demi-Trix is a group of three witches and one Fairy called Lucy (Witch of Insects), Tammy (Witch of Hate), Sophie (Witch of Toxins), and Deseree (Fairy of Felines). They detest The Fairix Circle as they always stop them achieving their goals, which makes them look bad in the eyes of the re-incarnated Darkar.

Emily is the alternate persona of Laura, she is the main antagonist of season 7 and 8. She is known as the Witch of Magix and has the ultimate power of The Mermaid Heart.

All the Fairix Circle at the end of Season 7.

Retrieved from "https://winxclubfanon.fandom.com/wiki/The_Fairix_Circle?oldid=67497"
Community content is available under CC-BY-SA unless otherwise noted.